In 1899, Francis Barraud, painted a picture of his brother’s dog, “Nipper”, listening intently to a windup Edison-Bell cylinder phonograph. The trademark was registered by Berliner Gramophone for use in the United States on July 10, 1900. In 1929, “His Master’s Voice” trademark was acquired by the Radio Corporation of America. It was the first appearance of a RCA dog “mascot”.

The iconic “RCA dogs” image of “Nipper” and “Chipper” symbolizes the long heritage and the warm, youthful energy that is unique to RCA. Listed as one of the Top 10 of Famous Brands of the 20th Century.

The RCA dog “Nipper” (1884-1895) belonged to Mark Barraud, decorator for a London theater. The dog was born in Bristol, England. Commonly identified as a fox terrier, the RCA dog “Nipper” was probably actually a terrier mix. He may have had plenty of bull terrier in him, even some think he was a Jack Russell Terrier. The name “Nipper” came about because of a trait of his puppyhood: his tendency to greet strangers by biting their legs, but that might be fanciful. In 1887, when Mark Barraud died unexpectedly, his brother Francis Barraud (1856-1924), a painter, took “Nipper” home with him to Liverpool. The first painting depicting the RCA dog “Nipper” was called "Dog Watching and Listening to a Phonograph" and showed a dog looking inside a cylinder phonograph pavilion. 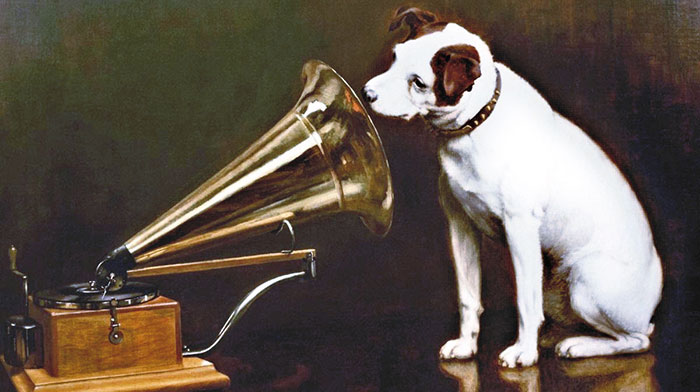 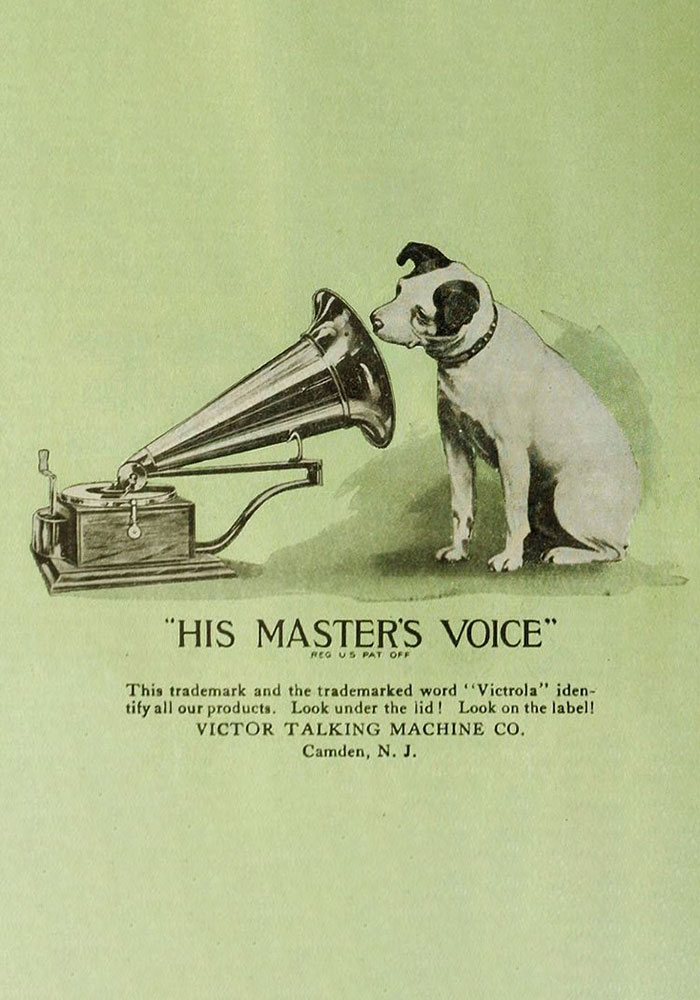 Thinking commercially and noting that the “Nipper” dog was listening to an Edison Bell cylinder, Barraud wrote to the Edison Bell Company in New Jersey for them to use the painting in their advertisements. But the representatives of the company failed to see how it could help sales and turned down his offer, because they believed that dogs don't listen to phonographs, as was their logical if unimaginative conclusion. Friends liked the painting and suggested to Barraud that he might make it more appealing by substituting a gold horn to replace the black Edison horn. Barraud liked the idea but needed a gold horn from which to model the new version of the painting, so he visited Barry Owen, the manager of Liverpool’s newly formed Gramophone Company, who understood the commercial possibilities. He offered to buy the painting and the rights to it if Barraud would make it a record gramophone instead of a cylinder phonograph, which Barraud did. A deal was made for both the painting and the copyright, and in October 1899 the deal was sealed when Barraud delivered the painting. 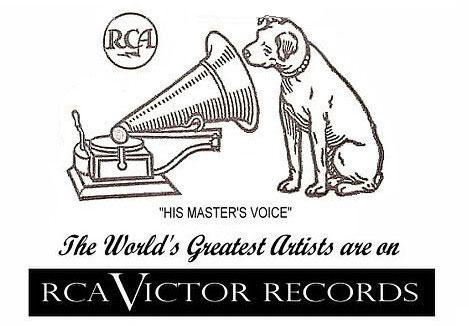 From Victor to RCA

At first the Gramophone Company Ltd. of London used the image sparingly in England. Then Emile Berliner (1851-1928), the U.S. inventor of the gramophone, talked to Owen about assigning to him the U.S. rights to use the picture. Owen did so, and in the U.S. Berliner was working with the Victor Talking Machine Company, which made the Victrola. In 1929, the American rights were acquired when the company became RCA-Victor and became known for radios as well as phonographs and records. For both Victrola and later for RCA-Victor, and eventually RCA Company, the Nipper trademark became well-known. The RCA dog “Nipper” thus gained notoriety on both sides of the ocean. At mid-20th century, so great was the inquisitive terrier’s fame that RCA erected a four-ton, 26-foot-tall “Nipper” atop its headquarters in Albany, New York, where it remains a city landmark. 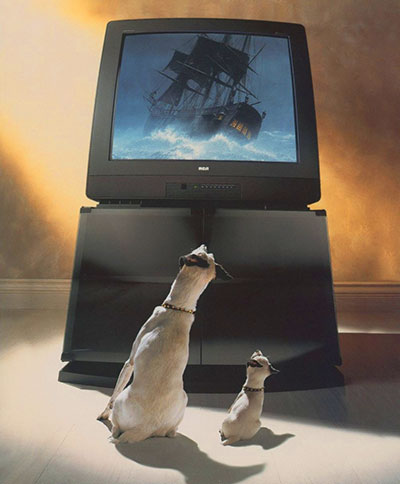 In 1990, advertising agency “Ammirati & Puris” (A&P) mixed the old with the new to give RCA brand a refurbished image and a much-needed boost. A&P brought back “Nipper” the dog –, the familiar pooch who has appeared in RCA's ads since 1929, – and then, to showcase RCA’s next generation of products, and to complement “Nipper”, introduced a Jack Russell Terrier young puppy “Little Nipper”. The name “Chipper” won a contest that RCA sponsored in 1991 to name the puppy dog: it connoted several ideas: "a computer chip; a chip off the old block; chipper, happy and upbeat, and it rhymed with “Nipper”. “Chipper”, of the next canine generation, in advertisements, was staring not at gramophones, but instead was enjoying new, high-tech electronics. “Chipper” represented the new breed of high-technology, design and innovation inherent in RCA products. "Chipper” stood for being more up-to-date, while ”Nipper” was enduring and reliable and stood for the company that invented the color TV. The pup embodied youth and vigor: TV advertisements featured “Chipper” skydiving and skateboarding. In 1995, a major RCA Advertising campaign created by A&P on RCA’s Digital Satellite System (DSS) launch in US, featured RCA dogs “Nipper” and “Chipper”, and included TV spots, Magazine Print ads and In-Store POS. RCA DSS Ad poster campaign, was hailed by Time Magazine as “the most successful new product launch of the year”. 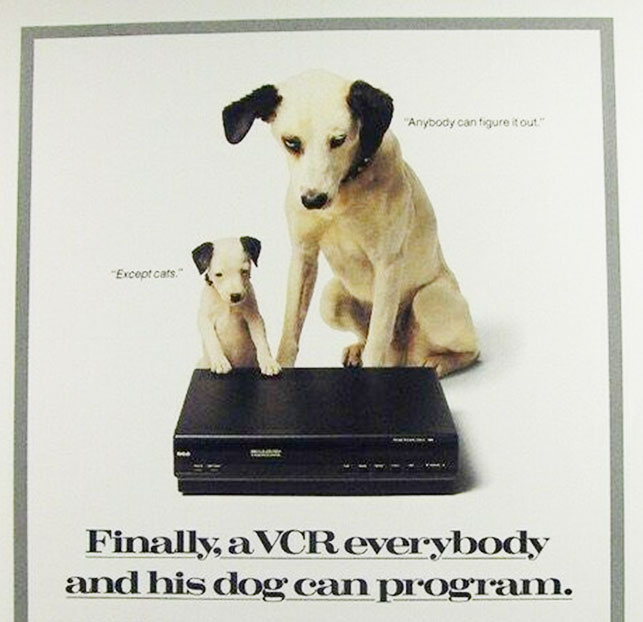 RCA, high technology even your dog can use

In a fall 1991 big advertising campaign, RCA declared war on high technology's confusing terminology. A large role in this assault on technological gobbledygook was played by “Chipper”. The campaign's TV commercials and print ads, through the Christmas sales season, reassured would-be buyers that RCA consumer electronics products uncomplicated high tech with built-in features, and left users with fewer buttons and gadgets to contend with. "Finally, a VCR everybody and his dog can program," said the headline of one print ad. "At last, technology that serves man," said the headline of another. "If your VCR is a pain to program, then get rid of it", said an announcer in one spot. Research showed that, by blending older and younger elements, through the “Nipper”+“Chipper” combination, RCA products are contemporary yet traditional. Consumers are convinced that “Nipper” and “Chipper” should continue to tell the RCA brand’s story for the next 100 years. 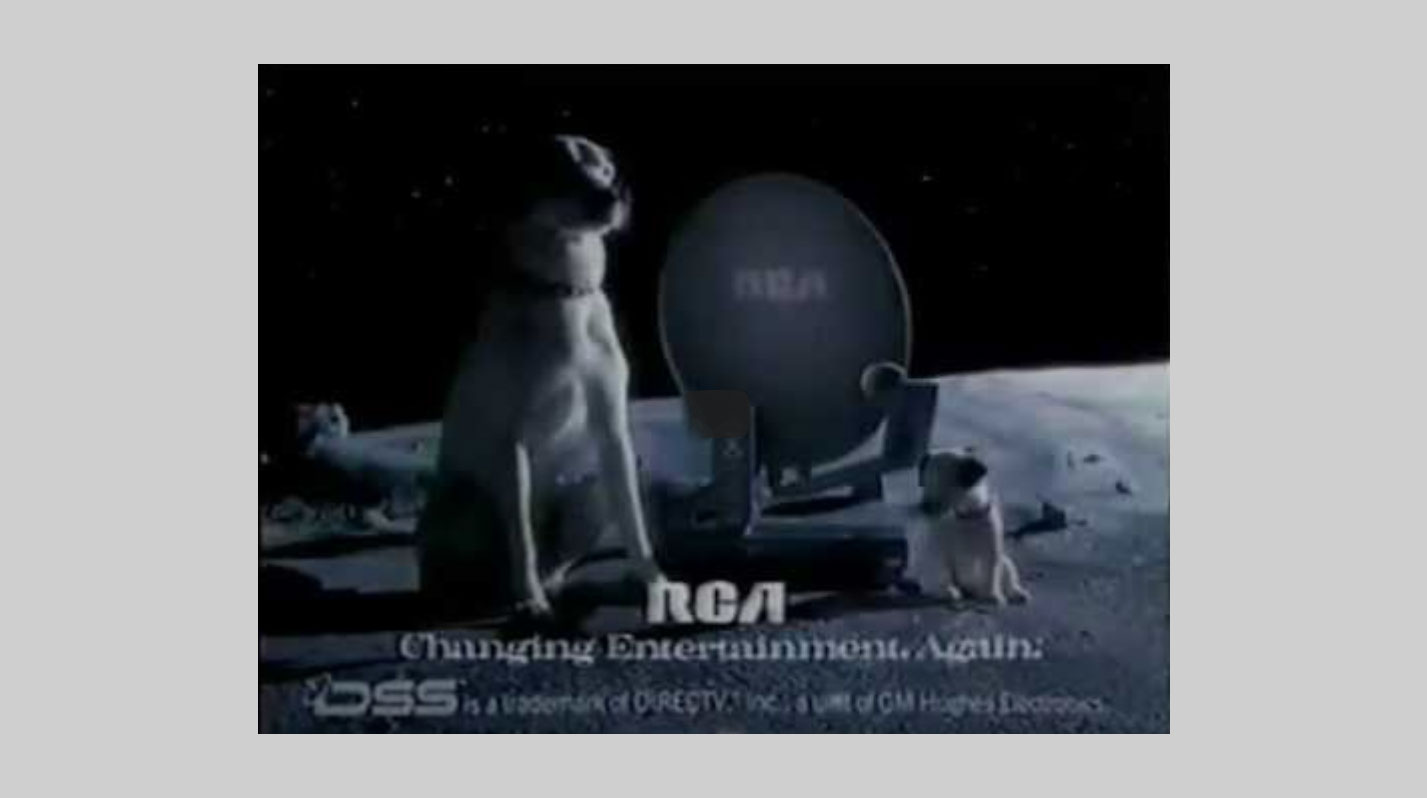